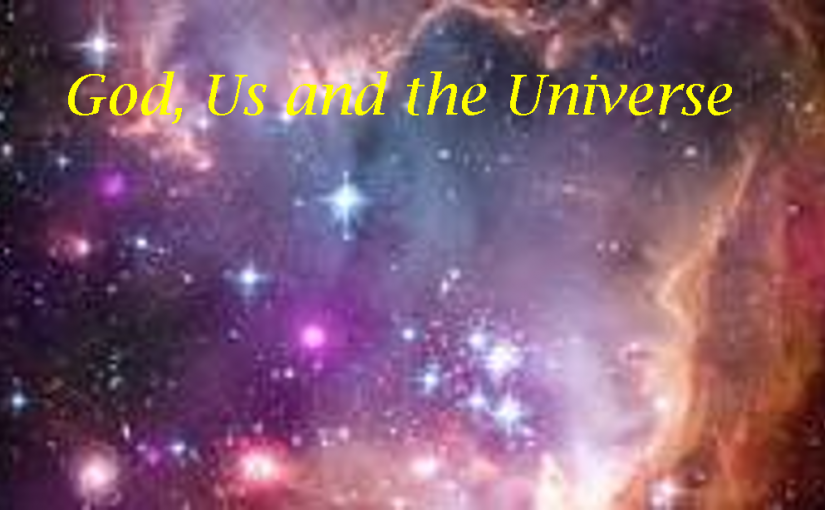 The book, God, Us and the Universe by Nicholas Ginex contains a compilation of 51 articles posted on an Internet forum.  The author shared his thoughts with many discerning and intelligent people who exhibited extraordinary depth with their comments.  The interaction between them and the author opened many avenues of thought whereby together they gained perspectives about God, religion, philosophy, politics and ethics.  A portion of this article was extracted to enlighten people that the Scriptures of the Judaic, Christian and Islamic religions need to be revised.

Will Science and Religion Be Compatible?

At a very young age, I was not immersed in the biblical Genesis account of the Creation because both my parents had to work for a living while my brother and I were raised by our Sicilian grandparents, who spoke very little English. It was not my parents but my religious Catholic instruction that acquainted me with the belief in God. At that stage of religious development, I had no real appreciation of the Creation account except that Adam was the first man and that Eve was created from Adam’s rib.

Fortunately, I received a public education and in high school enjoyed learning biology and was introduced eventually to the theory of evolution. I admired Darwin’s work and courage to document his research efforts that had, in my mind, much credibility. For even I, at a tender age, realized that man has many of the same organs and functions of dogs, cats, and our closest relatives, monkeys and apes. Funny, I thought, these animals have the same two eyes, ears, nose to breathe, arms, legs, and sexual and breathing apparatus as humans. Wow, we have so much in common. So even then, I found it difficult to believe man was independently created by God but was a more complex and fortunate creature to have had a greater brain, a voice to develop language, and hands to build and eventually write what he had learned in life.

Regarding God, very few people discount the belief in God. Those that do discount God as taught by a religion believe in God from a personal point of view. Even atheists and agnostics, as well as scientists, have no idea how the first atom was created and how billions of atoms came into existence to form matter. It boggles the mind to learn that there are billions of galaxies with billions of stars and billions of planets that make up our universe. Until scientists are able to answer how matter was created that eventually gave birth to living organisms, mankind will always believe in God. I do. The God I believe in has no form; He is incomprehensible, mysterious, and yet responsible for initiating the universe. So I believe in a force that pervades the universe. That force has found its way to conceive life, and all things are made from the same stuff that started the universe.

After receiving my indoctrination in Catholicism, I ventured into many different types of Christian churches and even attended Greek Orthodox and Jewish houses of worship. I was always impressed listening to the radio, with the talks given by rabbis, in fact, more so than sermons given by priests. So I had an open mind seeking to understand who was God. All my life I was interested in philosophy, sociology, and the humanities because I loved learning about the accomplishments of mankind and some of their greatest thoughts that I might embrace.

Well, into my forties, I read books by many religious scholars and became engrossed in learning more about what Egyptologists had to say about the past history of an almost forgotten civilization. Egyptologists such as Henry H. Breasted and E. A. Wallis Budge brought to life great works of beauty revealed within Egyptian temples, pyramids, and monuments. More importantly, upon reading their deciphered hieroglyphics, I learned how man first conceived one universal God; that God existed for over two thousand years before the birth of Jesus Christ. Having acquired quite a bit of knowledge from men who dedicated their lives to unearth and reveal history of a very spiritual people, I unintentionally started to write, upon my retirement as an engineer, to produce Legacy of a Father for my children.

This was the first book I ever wrote and I say unintentionally because I never planned to write a book. Sitting at my computer, the book unfolded itself into a logical sequence of who were the Egyptian people, their history and beliefs, and how their beliefs were imitated by the Hebrews who developed their religion based upon the beliefs in a soul, a hereafter, a morality based on truth and righteousness, and a belief in one universal God. Upon writing about the beliefs of the Egyptian people, I naturally was obligated to read the Torah, the Gospels and Revelation, and the Koran. This education allowed me to provide an objective critique of the Judaic, Christian, and Islamic scriptures. Of greater worthiness, I was able to reflect on what I wrote and provide recommendations to the religious leaders and followers of these faiths, which would be helpful in bringing their beliefs into a more unified version.

I have said enough about why I believe the idea of God will always prevail as long as science has not learned where the first atom came from. Those who desire to pursue how man first conceived God and how that God has profoundly influenced the development of the Judaic, Christian, and Islamic religions are encouraged to do an Internet search on the title Future of God Amen. As a man of optimism and love for the human race, I do believe that there are many men and women in this world who are intelligent enough to recognize that changes must be made in our religious beliefs about God.

It is easy to rant and rave why people should or should not believe in God and that it has been religious people who have caused the deaths of millions upon millions of innocent people. But there is a solution whereby science and religion can advance in parallel in our quest to know God by revealing the truth of our past. I recommend people read Future of God Amen to understand that the truth of the past can complement our scientific advancements. Perhaps this book will motivate daughters and sons of God to emerge and assist religious leaders to undertake a revision of their holy scriptures so that all people will not only accept each other’s religion, but also learn to love one another.

After much research and writing about God and the development of the major religions, it became clear that Scripture was inspired by men of God.  They put in writing the commands that would help their people to live in harmony under a given set of rules of conduct.  Such rules of conduct were developed by the first formal religion of the world that existed in Egypt.  Long before Abraham and Moses, the Priesthood of Amon developed the belief in one-universal God, the Creator of all there is.  It was this belief that cemented rules of conduct that, if followed, would allow the righteous to join their God upon death.

During many hundreds of years, the Egyptian priesthood revised their beliefs many times.  They eventually replaced their beliefs in many gods with one-universal God.  That God is announced by name today by many people – Amen.  The Priesthood of Amon wrote, Amon as the Sole God.  It was composed during the reign of Ramses II after accepting many of the ideas first composed by Amenhotep IV (reigned 1375-1358) who wrote, The Hymn to the Aton.  Both hymns are provided in the book Future of God Amen.

Through many centuries, the major religions have fought to establish their God as the true God. We see today, extremist Muslims killing Jews, Christians, Buddhists and people of other faiths because their Scripture, The Qur’an, states they have the true religion (Sura 9:29), it is the Religion of Truth, and that Allah will make it prevail over all other religions (Sura 9:33).  Hence, on the world stage we have a “bully religion” whereby Islamic leaders indoctrinate their followers to eliminate the religious beliefs of other people and kill them to achieve their objective.

To stop the insanity of killing people in the name of God, the Muslim people themselves must pressure their religious leaders to wake up and revise the Qur’an to reflect the greatest command given by a Man of God – love one another. If the Egyptian priesthood were intelligent enough to update their Scriptures many times until they arrived at the belief in one universal God, so can Judaic, Christian, and Islamic religious leaders. It is foolish to believe that Scripture is encased in concrete never to be changed. Will religious leaders of these faiths be perceptive, compassionate, and wise to revise their Scriptures with the objective to teach all people to love one another?

A cooperative response to this challenge by religious leaders and their followers will steer mankind into the realm of knowledge where science and faith are compatible in man’s quest to know God.  Such an effort is based upon truth of the evolution of God and religion that is obtainable from our past history.

The following assessment of the author was given by Dr. Ahreeman, a college professor.

“Nicholas Ginex is a valuable author, scholar and philosopher. His writings are enlightening and informing to the open minds. His views are about universal love and peace for the mankind and all creatures throughout the universe. Reading Ginex books are essential for the philosophy, history and science buffs and enthusiasts.

Ginex is an explorer in time and space, travelling with the warp speed throughout the universe, seeking for the truth of the universe. Can you catch up with Ginex?  The only way you can, is if you have an open mind!”