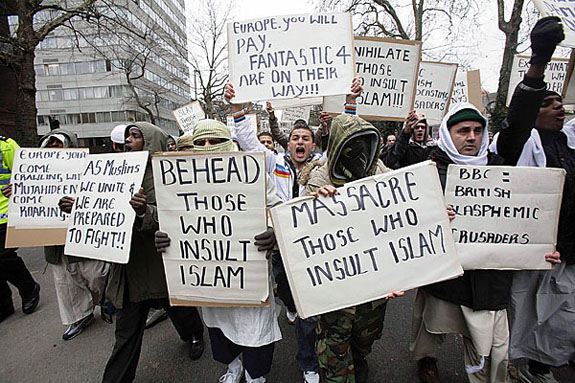 This article was placed on the Internet as a Press Release via the link:

Google censored Islamic atrocities in an article to keep Americans ignorant of discontent and terror committed by extremist Muslims around the globe.

Nicholas Ginex, a perceptive writer, philosopher and humanist informs Americans that Google has censored the Simon and Garfunkel song, Sounds of Silence provided in the press release, Need for an Islamic Reformation. It was placed on the Internet via the link below:

Google provided the following rationale to censor Sounds of Silence:

This action by Google violates the First Amendment of free speech by silencing the public outcry against abominations and terror committed by Islamic terrorists. Removal of the YouTube video was an attempt by Google to suppress the truth of Islamic atrocities, which keeps Americans ignorant of the truth of Islamic bigotry, hatred, and violence illustrated in the figure provided.

YouTube is an American video-sharing website headquartered in San Bruno, California. Google bought YouTube in November of 2006 for $1.65 billion dollars and it is one of its subsidiaries.

All Americans, be advised that Google has an objective to monitor and suppress articles that reports negatively on Islamic ideology or abominable actions. The content in Sounds of Silence reveals the atrocities committed by Islamic terrorists. It was posted to inform and educate people that Islam is not a religion of peace. Google appears to object to revealing the bigotry, hatred, violence and killing of innocent people by Muslims indoctrinated with extremist beliefs contained in the Qur’an.

As the author of Allah, We, Our and Us, I am committed to inform Americans, and Muslims, why the Qur’an is the source of discontent and terror in many countries. It is essential that through communication they learn why the Qur’an incites bigotry, hatred, violence and the killing of innocent people.

Fortunately, after several Internet searches, the following videos of Sounds of Silence were found that shows the atrocities by Islamic extremists.  They are:

Below are videos that illustrate the injustices and horrors of Islam with the song, Imagine.. there’s no Islam

All wealthy business people, financially endowed humanitarians, the national media, and counter-terrorism agencies such as the FBI and CIA in America and media in many other countries must join their resources together to educate and inform people WHY Islam is a danger to peace-loving people and WHY the Qur’an must be revised.

Key for successful implementation of these objectives is to UNDERSTAND THE PROBLEM. A recommended resource is Allah, We, Our and Us. This book presents Why the Qur’an must be revised and understand why it is necessary. The historical novel, Allah, We, Our and Us provides a history of the rise of Islam as a Theocratic Empire, reveals many abominable verses in the Qur’an, describes how Muslims are indoctrinated from early childhood, and provides solutions for Muslims to love people with other religious beliefs. This book was not written for profit but to inform and educate people about the Islamic threat. It is available as a FREE READ.

Revise the Qur’an or Begin WWIII

All people must assist Muslims to acknowledge that the Qur’an must be revised to eliminate many abominable verses and emphasize the command to love one another.

Islamic leaders and scholars must take the next step in advancing Muslims to a higher level of spirituality that promotes love of all people, which is to revise the Qur’an. To NOT take on this noble effort is to cause continued Islamic terrorism and eventually World War III. This effort, although considered impractical, is the best way to have over 1.7 billion Muslims learn to love their fellow brothers and sisters and prevent a nuclear catastrophe that would kill millions of people and pollute the earth.

Islamic Representatives of God Must Revise the Qur’an

Islamic scholars are well schooled to know that the Qur’an was conceived through Muhammad’s exposure to Hebrew and Christian beliefs. Many verses in the Qur’an were conceived by Muhammad to raise his people to the next level of spiritual worship. Astute Islamic scholars know that beliefs of each religion were founded by righteous men, inspired by their belief in God, to provide a moral code for their people. Will imams, caliphs and mullahs work with their Islamic scholars to realize that the Qur’an can be changed? That beliefs are not encased in concrete? Can they understand the need to revise the Qur’an to raise Muslims to a higher level of love for all mankind?

If Islamic Representatives of God Fail to Revise the Qur’an

Failure of imams, caliphs and mullahs to revise the Qur’an will verify that they lack the perception, compassion and understanding to raise their Muslim followers to a higher level of spirituality that will enable them to love all people regardless of their religious beliefs. If Islamic religious leaders fail to revise the Qur’an, Muslims world-wide must unite to forcefully overthrow them from power and initiate an Islamic Revolution. On January 1, 2015, the Egyptian President, Abdel Fattah el-Sisi spoke to Islamic scholars from Al-Azhar, the highest center of Sunni Muslim learning.  His message was for Muslim leaders to rethink religious discourse and “purge it of flaws” that negatively affect Muslims to become terrorists.

Read the article, Need for an Islamic Reformation posted on www.nicholasginex.com/

Comments and questions are welcomed via nickginex@gmail.com.