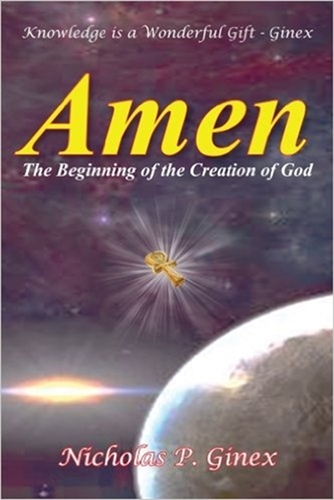 Ginex reveals who is Amen and assists the next phase of mankind’s spiritual and moral development.

A perceptive writer, Ginex reveals an unacknowledged revelation that Amen is the first universal God conceived by mankind. This article was posted on the Internet on November 25, 2016 via the link:

Long overdue, AMEN, the Beginning of the Creation of God was written to inform people around the world that Amen was worshipped as Egypt’s greatest God over 2,000 years before the birth of Jesus Christ.  His name is announced at the end of a prayer, supplication, thanks for a favorable outcome, and reverently sung in many houses of worship.

And yet, religious leaders of the Judaic, Christian, and Islamic faiths fail to acknowledge this God by reducing Him to the definition, “So be it.”  But more unacceptable, is not acknowledging the words of Jesus Christ in John’s Revelation 3:14 that Amen is the beginning of the creation of God; it is provided below:

These things saith the Amen, the faithful and true witness,

the beginning of the creation of God.

This profound biblical statement by Jesus Christ clearly reveals an astonishing revelation about God.  For if Amen was indeed the faithful and true witness at the beginning, he is the God of all creation.  Single-minded religious leaders and scholars have misconstrued and reinterpreted the words of Jesus in an effort to deny Jesus’ acknowledgment of Amen.  His words reveal that the reverence formerly given to Amen by the Egyptians had never lost its impact, even though the Hebrews have adopted “amen” from the Egyptians to connote truth and religious leaders have defined its meaning as “so be it.”

Prior to Amen, Ginex’ published his first historical novel, The Future of God Amen.  It provides a history of the Egyptians migration into Egypt, their multiple gods, pharaohs, and how their beliefs led to the conception of one-universal God.  To emphasize the Egyptian beliefs, Ginex wrote Amen to reveal in detail the development of the God Amen, His attributes, and worship that became known throughout Egypt and the neighboring countries.  The culmination of Nicholas’ book was the many recommendations he presented for religious leaders and devout believers of God to promote tolerance and love for people with other beliefs.  Overviews and book reviews of both books are presented on http://futureofgodamen.com and a free Internet copy of Future of God Amen is provided via http://iranpoliticsclub.net/authors/nicholas-ginex/index.htm.

The research and knowledge acquired to write the above books led Mr. Ginex to write a paper that was accepted by the Clute Institute, an organization founded in 1985 for the purpose of disseminating the latest scientific research on various business, technical, educational and economics-related topics.  Knowing that there are people who are genuinely interested in the values and morality taught to our youth, Nicholas was able to have the Clute Institute publish the paper titled, Provide History of Religion and God.  He harbors a deep gratitude for those readers who will invest time to read this paper by clicking on the link http://cluteinstitute.com/ojs/index.php/CIER/article/download/7729/7793.  The first few lines of the Abstract emphasizes,

“There is a need for high school, college, and university educators to introduce their students to a history of mankind’s development of religions and beliefs in God.  Regarded as too sensitive a subject, students are deprived of learning how mankind has evolved ways to establish moral and righteous behavior to maintain harmony among competing groups within a growing community.”

It is hoped that educators at all levels in America will share the knowledge contained within this paper with their students for it was written solely to eliminate ignorance of how our beliefs in God originated and presents recommendations for mankind to advance to the next phase of spiritual and moral development.

Nicholas P. Ginex is a graduate of New York University with a BEE degree and an MBA in finance from Adelphi University in New York. He worked in design and distinguished himself in the support disciplines of Maintainability and Configuration Management (CM). As CM manager of software and hardware products at top aerospace and commercial companies, his writing, organizational, logical and analytical management skills produced plans, procedures, and supporting documents for the successful operation of entire engineering projects.

Of worthwhile mention is the following commendation provided by Dr. Ahreeman, professor at a California university, creator and administrator of the Iran Politics Club website.

“Ginex is a valuable philosopher, Egyptologist, scholar, author, and a scientific person.  Inside IPC (Iran Politics Club), he needs no introduction and outside IPC, all you need to know is that he is a true American Patriot, Concerned Global Citizen and a Lovely Humanitarian. Ginex is well educated and radically logical.  Ginex seeks the truth, exposes corruption and offers solutions.  His writings are strongly recommended to read.”

Comments are welcomed via nickginex@gmail.com.