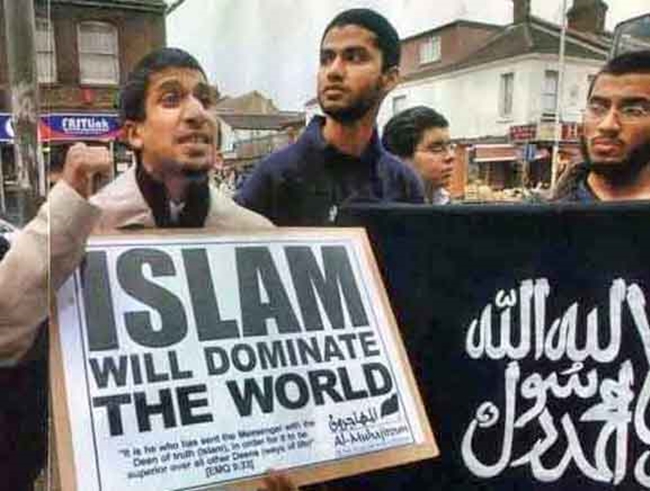 To END Islamic terrorism and destruction of our planet, the Qur’an must be revised to teach God’s Greatest Command – Love one another.

Failure to revise the Qur’an will confirm that Muslim religious leaders are intent to make Islam prevail over all other religions with an objective to dominate the world.  From its beginning to the present, Muslim leaders have used the Qur’an as a manual to cause terrorism and the death of millions of innocent lives to establish an Islamic Empire. Indoctrinated with the dogma of the Qur’an, Muslim leaders and their followers fail to accept that all ideas, inspired or created due to learning events, can be changed.

Ability to revise religious beliefs have been demonstrated many times by the Egyptian Priesthood.  As revealed in a one-page figure presented in an article titled “AMEN – The Beginning of the Creation of God,” inspired men have developed the belief in one-universal God after revising their beliefs many times.   The following link provides Figure 1 for readers to learn of mankind’s development of one-universal God.

Beginning with 2600 BCE, the Egyptian Priesthood wrote The Creation of Atum. It introduced the concept of a soul and the God Atum, creator of heaven, the earth, moisture and air.  Around a 1,000 years later, the Priesthood wrote A Hymn to Amon-Re; the supreme God who was venerated as, “the Maker of all mankind, Creator and Maker of all that is.”  Then around 1370 BCE, Amenhotep IV was the first pharaoh to envision God by personalizing the sun.  A visionary and poet, he composed “The Hymn to the Aton.”  Finally, in 1270 BCE, the Priesthood of Amon wrote, “Amon as the Sole God.”  The Priesthood went full circle by linking Atum with Amon – the first One-Universal God.

This short snapshot of mankind’s development of one God conclusively proves that Scripture is NOT encased in concrete NEVER to be revised.  Arrogant religious leaders persist to teach Scripture is inviolate because their want to hold onto power to control their followers.  This control limits worshippers from questioning and evaluating other religions or grow with other ideas that would allow them to expand knowledge about themselves and about God.

We return to the question, Why the Qur’an Must Be Revised?  First, all Muslims must learn that the Qur’an does not present the words of Allah.  Many commands were written by a party of over-zealous, fanatic religious leaders identified as “We, Our and Us” throughout the Qur’an.  By teaching Allah is “We, Our and Us,” imams, caliphs and mullahs are able to indoctrinate their followers that they are commanded by Allah.  It’s this association that empowers followers to believe they are authorized and commanded by Allah.  The “We, Our and Us” deception is so effective that followers will even commit suicide with the belief Allah commands them to fight so that Islam will prevail over all other religions as proclaimed in the Qur’an, Sura 9:33.

Sura 9:33. He it is Who sent His Messenger with guidance and the Religion of Truth, that He may make it prevail over every other religion, even though those who associate partners with Allah may dislike it.

The Qur’an has been used as a manual by religious leaders to indoctrinate and command their followers.  A sample list of abominable commands in the Qur’an that incite bigotry, hatred, violence, and the murder of innocent people who do not worship Allah may be read by clicking on Allah, We, Our and Us and going to Chapter 3.3.

Passages in the Qur’an reveal they were written by a party of men.  The following Qur’an passage clearly reveals it had to be written by a religious leader or commander of high rank that tells his army to draw on the wrath of Allah to kill disbelievers or hell shall be their abode.

Sura 8:16-19. O ye who believe, when you encounter an hostile force of the disbelievers, turn not your backs on them. Whoso turns his back on them on such an occasion, unless maneuvering for battle or turning to join another company, shall draw upon himself the wrath of Allah and hell shall be his abode. An evil resort it is.

Thus on the day of Badr it was not you who slew them, but it was Allah who killed them; and it was not thou who didst throw gravel at their faces, but it was Allah Who threw it, that He might confer a great favour upon the believers. Surely, Allah is All-Hearing, All-Knowing. That is so; and Allah will surely undermine the design of the disbelievers.

The commander tells his army not to turn and run when encountering a hostile force unless it’s necessary to maneuver for battle by turning and joining another company.  Also, his leadership strengthens the resolve of his troops by stating, “it was not you who slew them, but it was Allah who killed them.”  These are not the words of Allah but a commander or powerful religious leader. 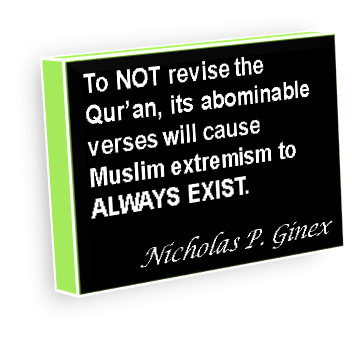 If Muslims in any country are NOT able to force their religious leaders to revise the Qur’an, then they must be forced to leave.  Failure to revise the Qur’an will cause Muslims to pursue the objective to have Islam prevail over all other religions.  As many freedom-loving countries find their values and culture corrupted by Islamic beliefs implemented under Sharia law, there can be only one outcome – World War III.

Comments are welcomed below or via e-mail, nickginex@gmail.com.

You may read Comments to this article provided on OpEdNews by clicking on Revise the Qur’an.

4 thoughts on “Revise the Qur’an”