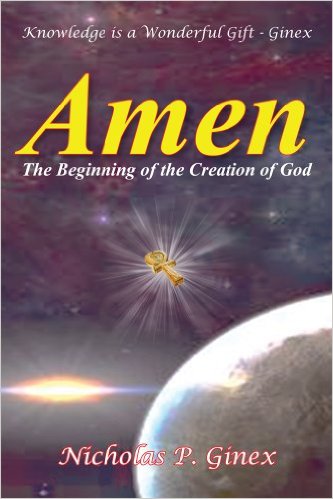 AMEN. The Beginning of the Creation of God has received two new book reviews in 2018. These reviews compliment the reviews by Mike Voyce and Andrea Borja who respectively wrote: Praise for Ginex’s Amen and Concise and Balanced.

Few people have been informed or taught that Amen was the greatest Egyptian god for over 2,000 years before the birth of Jesus Christ. Even less people know that Jesus announced in Revelation 3:14 that Amen is the faithful and true witness the beginning of the creation of God.    This is why Amen was written, to provide knowledge that has not been taught in our schools, universities, and religious institutions. To incite your interest in reading this factual book about how Ancient Egypt religious beliefs are the core beliefs of the Judaic, Christian and Islamic religions, two book reviews written in 2018 are provided below.

Click on the Amen image below for the online Pacific Book Review.

In the forward of Nicholas P. Ginex’s Amen: The Beginning of the Creation of God, the author encourages the reader to look past previously conceived and taught religious ideologies, and consider a “new” idea; that all religions share similar theologies because they share a common ancestor.

Ginex starts testing readers’ beliefs right away within the first chapter, titled “Jesus Proclaims a Revelation.”  In this chapter, Ginex traces the word “amen” back to ancient Egyptians and the pharaohs, long before the time of Jesus.  The rest of the book is carefully laid out to explain further this claim, that the word “amen” is not a prayerful supplication to the one God of Christianity, Islam, Judaism, but instead,

While such a claim deserves to have an audience, most will reject all the ideas brought up in the first chapter. Ginex is not a stranger to this statement and actually wrote a forward explaining negative reviews and outright rejections of his work.  Therein lies the real shame.  Most will not even listen to Ginex’s ideas because they reject what is core dogma in religion.

For those willing to keep an open mind, though, the claims are fascinating…and persuasive.  The author carefully lays out his theory with meticulous research and data.  A thorough bibliography is included, as are notations, photographs, and illustrations explaining the author’s hypothesis formations and development.  From this reader’s perspective, the research backed each claim and hypothesis thoroughly.  While the book and research might not pass strict academic standards, it leaves the reader in wonder. After all, what if…

It is not an exaggeration to say that this book is an important read.  By accepting the ideas, or at least accepting the What ifs, readers can come to understand that the commonalities between all religions can bring a peace to the world, one which is sorely missing.  At the very least, Amen will give you pause to think.  Embrace that pause and know that questioning theology doesn’t cause a loss of faith.  Instead, it can create a strength as followers in a religion can come to better understand why the ideas of their own beliefs are important.  Beside the importance of the topic, it’s also a solidly good read, one full of interesting historical facts that weaves together a premise that has the potential to do a lot of good in the world.

“It is the author’s hope that by exposing our religious views freely and honestly, we can someday not only agree to disagree but to come to a clearer understanding that we all pray to the same God.”

While the word “amen” is typically defined as meaning “so be it,” this book examines an Egyptian deity known as “Amen” and his influence on Judaism, Christianity, and Islam. Amen is seen not just as an important word and concept but also as an important god in religious history.

The first part of the book focuses on Egyptian religious history and then moves into examining the monotheistic God, Amon as the “sole God,” Moses and Judaism, Catholicism, and the Islamic Empire. These are then followed by Jesus and his Revelation as well as the future of religions. The book continues with an appendix which lists all the work the author did to promote this book and then an epilogue by another person. In the end, the book posits that the holy scriptures need to be revived.

With its in-depth examination of Egyptian religious history as well as Judaism, Christianity, and Islam, there is significant research done by the author which will make the reader ponder his premise. Filled with figures and tables which aid in this study, it is easy to become engrossed in this history. The focus is on one quote from Jesus in Revelation stating that: “These things saith the Amen, the faithful and true witness, the beginning of the creation of God.” The author sees this statement as verifying that Amen (Amon) is the god of creation. Due to its premise, the book is bound to spark a great deal of conversation in religious circles. The focus on humanity’s need to love one another is a valuable theme.