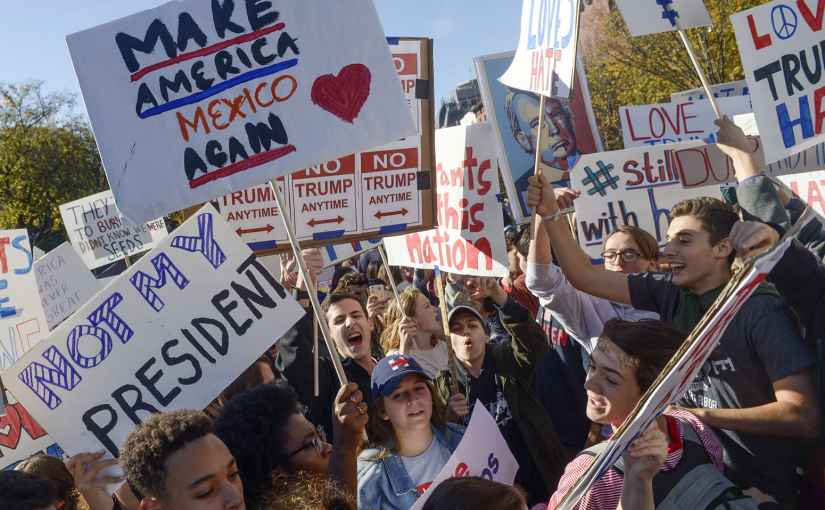 Hillary Clinton supporters are angry that Donald Trump was voted to be the 45th President causing riots in many American cities.

This article has been posted on the Internet via https://www.einpresswire.com/shareable-preview/VrzP3T2ynfpLJ3n5

One may sympathize with Hillary Clinton’s supporters who feel an injustice because she received over 337,000 more popular votes than Donald Trump according to Real-Time News on November 11, 2016.  This is the fifth time a candidate has won the popular vote but failed to win the election.

The injustice felt by Hillary Clinton’s voters may be due to rules established by the founding fathers in the Constitution whereby electoral votes by pre-selected representatives from each state overrides the popular vote of qualified citizens. Clinton’s electoral votes of 232 fell short of Trump’s 306 as of November 11, 2016.

Americans must examine why Hillary Clinton supporters are rioting in many metropolitan cities and several college campuses by destroying property and burning the American flag.   Some reasons why Clinton supporters were brain-washed by the Liberal News Media to hate Donald Trump are:

>>>  The National News Media did not provide fair and objective reporting of the faults and issues of each candidate.   To help remedy this deficiency, some key issues were posted on the Internet titled, “November Votes Will Define America” and may be accessed via http://www.einnews.com/pr_news/350137890/november-8-votes-will-define-america.

>>>  News Media journalists wrote disparaging articles against Donald Trump by as much as 10 to 1 over Clinton, which infected the minds of many voters to believe Trump is unworthy to be president.

>>>  Negative TV and Super PAC ads against Trump were supplemented with an overwhelming number of disparaging articles by many News Media outlets.  They succeeded in disparaging Donald Trump as unfit to be president.  Still, in spite of their negative ad efforts, Americans were smart enough to vote for Trump.

The Liberal News Media FAILED TO INFORM American voters why Hillary Clinton is a dishonest and corrupt person. Below are factual reasons why the former Secretary of State could not be trusted to be president by many Americans.

CONCLUSION:  Americans outsmarted the Liberal News Media by ignoring their brain-washing articles and voted for Donald Trump. Will Liberal News Media journalists and writers learn to report newsworthy facts that informs Americans instead of opinionated and biased articles?  Readers of this press release may or may not agree that the above reasons caused Hillary Clinton to lose the election or they may express other reasons on the author’s website cited below. Americans will see if Donald Trump’s “leadership” will create jobs, restore integrity and trust in government, strengthen our military, increase economic growth, establish law and order, and reduce the national debt of 19.8 trillion, reported November 1, 2016.

Your comments are welcomed and will be responded to.  Do you feel the Liberal News Media purposely influenced Americans to vote for Hillary Clinton?  But the question arises, why would national media outlets support Hillary Clinton when it is well known that she is dishonest and corrupt as shown in this article and exposed by many reputable news reporters?