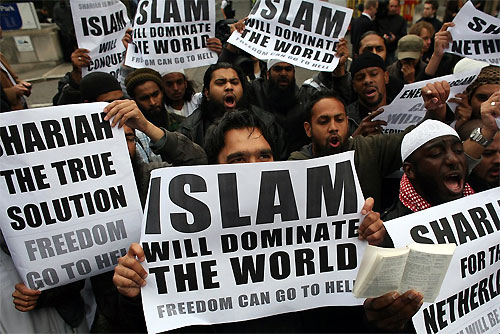 Muslims need to learn there are abominable verses in the Qur’an that are the source of discontent and Islamic terrorism.

FOUNTAIN VALLEY, CALIFORNIA, UNITED STATES, August 22, 2017 /EINPresswire.com/ — Nicholas Ginex tells Muslims and non-Muslims to communicate with one another to expose the abominations in the Qur’an. By exposing abominable verses Islamic religious leaders will be pressured to revise the Qur’an.

Through communication Muslims will learn that they have been indoctrinated to believe a theology that causes them to become bigots, hate people who have other religious beliefs, and kill themselves and people in suicide and extremist attacks.  They will no longer tolerate imams, caliphs and mullahs to make fools of them by killing their own children for loving other people or having other religious beliefs.

Wealthy business leaders, humanitarians, news media, government counterterrorism agencies, and people around the world must COMMUNICATE why the >>Qur’an must be revised.<<

To achieve an effective communication campaign, they can purchase Allah, We, Our and Us for distribution to educational institutions, government agencies, and humanity organizations around the world.  It provides how Islam became a Theocratic Empire in just 29 years from Muhammad’s death and why abominable verses in the Qur’an cause Islam to be a danger to all civilizations.  It is available as a Free Read.

A core belief that restricts Muslim acceptance of religious beliefs of other cultures is the incessant indoctrination that “Islam is the Religion of Truth and Allah declares it over all religions. (Qur’an 9:33 translation by Dr. Syed Vickar Ahamed, 2006).”   This ideology forms the psyche of the Muslim mind that their religion shall “prevail over every other religion (Qur’an 9:33 translation by Muhammad Zafrulla Khan, 1970).”

Two decades after Muhammad’s death, a religious party of men incorporated into the Qur’an the authority to invite goodness, enjoin equity, and forbid evil.  The five verses below conclusively reveal the TRUTH that they wrote many verses in the Qur’an to indoctrinate Muslims.

Sura 3:105. Let there be from among you a party whose business it should be to invite goodness, to enjoin equity and to forbid evil. It is they who shall prosper.

Was this written by a party of men or Allah?  It could not be Allah because they even authorized themselves to abrogate or cause to be forgotten previous commandments of Allah in the verse below.

Sura 2:106-108.  Whatever previous commandment We abrogate or cause to be forgotten, We reveal in this Qur’an one better or the like thereof: Knowest thou not that Allah has full power to do all that He wills? (1970 translation by Zafrulla Khan)

Another verse written by a party of men is revealed in Sura 96.

Sura 96: Tell me, if he who prays follows the guidance and enjoins righteousness, and he who obstructs rejects the truth and turns his back on it, what will be the end of this last one? We will surely drag him by the forelock, the forelock of a lying, sinful one.  Then let him call his associates, we too will call our guardians of hell.

Surely, it cannot be Allah who drags a sinner by the forelock but men under orders given by a party of men.  The next sura verifies Allah cannot be “We, Our or Us” because it would mean Allah kills people at night or while they sleep at noon.

Killing dwellers and destroying their towns could not be by the Most Gracious, Ever Merciful Allah.  Sura 8:16-19 verifies many verses were written by a religious leader or powerful commander.

Sura 8:16-19. O ye who believe, when you encounter an hostile force of the disbelievers, turn not your backs on them. Whoso turns his back on them on such an occasion, unless maneuvering for battle or turning to join another company, shall draw upon himself the wrath of Allah and hell shall be his abode. An evil resort it is.

Thus, on the day of Badr it was not you who slew them, but it was Allah who killed them; and it was not thou who didst throw gravel at their faces, but it was Allah Who threw it, that He might confer a great favour upon the believers. Surely, Allah is All-Hearing, All-Knowing. That is so; and Allah will surely undermine the design of the disbelievers.

The above sura was written by a commander as one reads of the strategy not to turn and run when encountering a hostile force unless it is necessary to maneuver for battle by turning and joining another company.  But notice, in the second paragraph the commander uses his leadership to strengthen the resolve of his troops by stating, “it was not you who slew them, but it was Allah who killed them.” He even has his men believe that “it was not thou who didst throw gravel at their faces, but it was Allah Who threw it.”

Clearly, these are not the words of Allah but a commander or a powerful religious leader. The commander’s technique of using Allah as sanctioning atrocities has been a successful form of brainwashing or leadership to convince his fighters that the killings are not through their own volition but by Allah who supports and directs their actions.  This is why Muslim terrorists yell >>Allah Akbar<< in the performance of violence and killing nonbelievers.

The above suras conclusively prove that many of the suras were written by despotic men whose ambition is to conquer the lands and wealth of nonbelievers to establish world-wide the religion of Islam.

Conclusion:  Muslims and people world-wide must EXPOSE the Qur’an as the source of discontent and Islamic terror committed by Muslims.  This press release reveals the Quran was written by a party of men and therefore CANNOT be the Perfect Word of Allah.  Only through >>communication of the TRUTH<< can Muslims be courageous to initiate an Islamic Reformation with the objective to Revise the Qur’an.