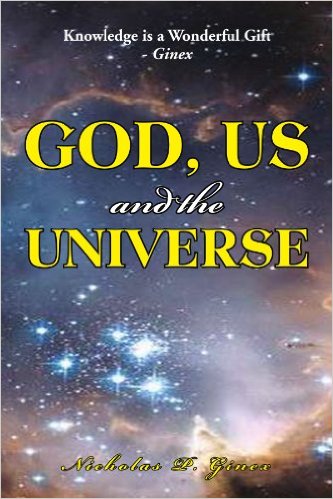 During the holidays people enjoy reading. This article recommends books that present how mankind conceived one God and the development of major religions.  The following presswire link was released on December 12, 2017 and provides the article below.

Nicholas Ginex, a perceptive writer of our time, has written books to inform and educate young and mature minds to learn the history of how mankind conceived One-Universal God and how that God has been envisioned by the Judaic, Christian, and Islamic religions.  As a young boy, Nicholas wondered who was God and where did He come from?  This question many people ask themselves at some period in their lives.  Raised as a Catholic, his curiosity led him to attend the services of many Christian and Jewish churches to learn how they prayed and believed in God.

As Nicholas matured, he engaged in many conversations with devout men that strongly believed and proselytized their religion.  He found that due to the many similarities of their beliefs, there had to be a common root that caused the birth of their religions.

Having read many books by religious scholars and exceptional Egyptologists, he self-published his first book at the age of sixty-eight.  It was titled, Legacy of a Father, which was written for his four daughters to remember him after death.  This book reveals that the first formalized religion developed in Egypt and was where the concept of a soul, heaven, and One-Universal God was conceived.

Too long for the average reader, with over 650 pages, Legacy of a Father was cut in half by excluding the history of Egypt, its succession of pharaohs, and titled, Future of God Amen.  It presents evidence of how the major religions of Judaism, Christianity, and Islam emulated the original beliefs of the Egyptians.

To further focus the reader on why the name of the greatest Egyptian God is announced in many houses of worship and said throughout the world, Nicholas published AMEN, The Beginning of the Creation of God.  His book exposes the core fact that Jesus Christ in John’s Revelation, 3:14, proclaimed:

These things saith the Amen, the faithful and true witness, the beginning of the creation of God.

This revelation by Jesus Christ validates that Amen is the beginning of the creation of God.  Amen was strongly venerated throughout the ages.  His name is still said by believers at the end of a prayer in their homes and in their house of worship.  Whether they are religious or not, people say Amen when requesting or giving thanks for a desired outcome and they sing Amen with reverent voices in houses of worship.

To provide factual evidence surfaced by Egyptologists that verifies how the scriptures of the Egyptian, Hebrew and Catholic religions developed the concept of One-Universal God, Nicholas wrote a paper titled, Provide History of Religion and God.  Published by the The Chute Institute, it presents an illustrative overview that reveals Egyptian writings led to the development of the Hebrew and Christian scriptures.  The link for this paper is provided below.  It was noticed by ERIC (Education Resource and Information Center) and placed on the Internet.  ERIC is sponsored by the Institute of Education Sciences (IES) of the U.S. Department of Education.

Nicholas’ pursuit for knowledge had gained the respect of many writers in religious forums.  He believes the values of honesty and integrity are strengthened with the belief in God and are crucial for humanity to thrive in any civilization.  To initiate an understanding about the beginning of the Universe, Nicholas opened avenues of thought that enter the realms of philosophy and science.  His article titled, Does Consciousness Pervade the Universe? provides a stimulating and philosophical view that joins science with mankind’s quest to know God.  This article has been placed on the Iran Politics Club website and made available via the link below.  It presents the philosophical view that all things have a beginning.

The developer and administrator of the Iran Politics Club website has honored Nicholas by hosting many of his articles and three books, which are available via the link:

The books are titled:

Nicholas writings were motivated to unveil the truth about our past history and expose lies and deceit that have led to the killing of innocent lives. He desires to have all people understand why the religion of Islam needs to go through a reformation with needed revisions to the Qur’an. In Allah, We, Our and Us, he presents how Islam became an empire by conquering many countries and subjugating people they captured to worship Allah or die.

Having read the Qur’an line-by-line, Nicholas exposes its many abominable verses that incite bigotry, hatred, violence, and the killing of innocent people because they have religious beliefs other than Islam. Both books, AMEN, The Beginning of the Creation of God and Allah, We, Our and Us, respectively make exceptional gifts that increases knowledge about the beginning of God and why the Qur’an was written by a group of fanatical men to indoctrinate Muslims in believing that Islam will prevail over all other religions.

Much has been presented in this Press Release.  The author thanks readers for taking time to examine the book reviews provided on the website http://www.futureofgodamen.com.

Time is precious and such examination is warranted to invest time to acquire knowledge. Time invested to read about Mankind’s development of the belief in God and why Islam is a threat to all people around the world – is time well spent.

Readers who wish to read articles written by Nicholas Ginex and/or provide comments, may visit his website at http://www.nicholasginex.com.